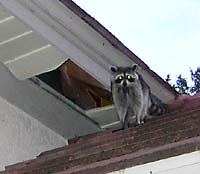 Raccoons are common nuisance animals, especially in urban areas where food and sheltering structures are plentiful. The mild climate and dense population of the Gulf Coast provide a particularly hospitable environment for them to feed and multiply.

Raccoons Feed And Roam At Night

Raccoons are nocturnal and omnivorous, meaning they are most active at night and eat almost anything. Garbage cans are their favorite refrigerators and any accessible attic is their home of choice. With thick fur, attractive markings and bright little eyes, they can seem friendly, clever and, with their habit of washing food before they eat it, almost human.

Don’t be fooled. Because they eat garbage, they are host to many diseases and parasites that are dangerous to humans. Raccoon round worm, also known as Baylisascaris procyonis, can infect small children. Florida’s warm climate makes this animal susceptible to fleas and ticks, which carry another set of pathogens. Like bats and a host of warm-blooded animals, rabies has been documented in Florida raccoons and can be transmitted to humans through bites.

We Will Do The Job For You

Our wildlife control specialists can protect homeowners from raccoon round worm (Baylisascaris procyonis) and rabies by finding out how the raccoon is getting into an attic, garbage can or outbuilding, and secure the structures when the animal isn’t around.
We can trap the raccoon humanely and safely, so you don’t have to.  These are not animals that homeowners should try to trap themselves. Though a nuisance raccoon can be shot by anyone with a hunting license, this animal is otherwise protected by law.